Today is a great day for change! 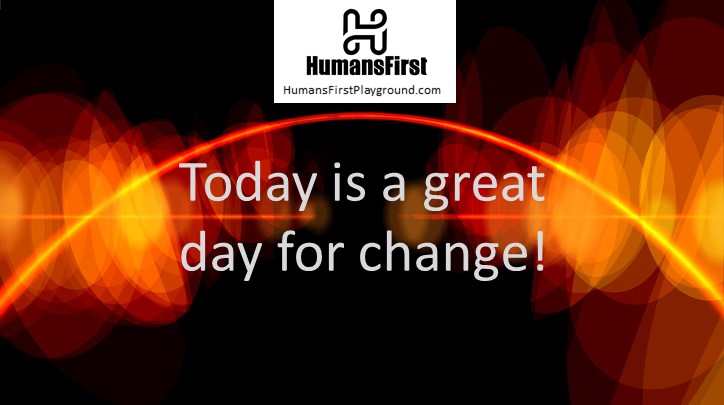 03 Aug Today is a great day for change!

Posted at 12:54h in Uncategorized by WP_mikevacanti 12 Comments

Every week someone tells me that all efforts of goodwill and belief in an evolved state of business that puts HumansFirst is doomed to failure until some government intervention or World Economic edict is pressed into action. I am told that until Fortune 100 CEOs have some epiphany that fundamentally alters their belief and actions, that no change is possible – that I am wasting my efforts and essentially talking nonsense.

Usually, it is an older man – who has apparently surrendered to the chains of despair, presenting their limiting beliefs as wisdom.

I feel for them. It’s a steep climb.

Capitulation is inversely related to strength of belief and determination. For me, it’s not a matter of being right, it’s a deep desire to become better, and belief in humanity. There is no illusion that this imperative evolution will happen in a single season, in rapid fashion. Nor do I hold any belief that some authoritative agency, or stroke of a manifest will accelerate or heighten the impact.

I believe in people. Business is people. When every emerging leader understands choice; every brilliant, vibrant rising professional from start-ups to big-4 consultancies, to global 1000 entities are aware of options, change will happen. Having access to alternative programs, teachings, groups of people available for relationships within the communities of HumansFirst advocates and practitioners, multitudes will make this decision and pursue this path.

Assimilation to “everybody or nobody” thinking is weakness – I dismiss the defeated voice of acquiescent elders, the cynics, the pontificators. I have zero confidence that archaic agencies can influence an edict.

I do know that given the opportunity, PEOPLE will amaze us.

The opportunity to press forward with alternative selection; programs and education options, vast networks of heart-centered leaders, consultants, coaches, educators and peers that become the 1000 ramps and doorways to a better future. A sustainable, evolved and ultra-productive future.

Love is a business word. This is the first barrier, the first gate to pass through. It is an inside job – a shift from within, and confident pursuit of that intuitive urging. It will not, can not be impressed upon us from the outside.

Shed the false constraints, the battered voice of limiting beliefs and failed wills of the past. Your future is bright. You are strong and you do not walk alone.

Today is a great day for change!